The Origins of the ManchesterTerrier are to be found in old books and writings. The Manchester Terrier comes from the old Black and Tan Terrier, the original smooth coated working British Terrier. Most of our modern terriers are of British origin. Writings regarding these small hunting dogs go back centuries. In 1576 a complete classification of dogs was produced in Latin in the United Kingdom which included terriers, this was written by Johannes Cauis. 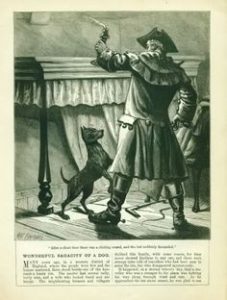 Terrier comes from the Latin word: “Terra” which means earth, therefore terriers are earth dogs. With their great sense of smell and good sight they can hunt and kill prey. All terriers were bred for their hunting skills. The Black and Tan being no exception. Although in some cases a heavier type of dog with varying coat types. These dogs were fast and dedicated to the job they were used for. The Manchester or as he was known at this time the Black and Tan terrier came into his own during the British Industrial revolution ( 18th century) when large industries grew up in the cities and towns of the United Kingdom. At this time there was no decent sanitation in these areas which led to large infestations of vermin in the form of rats! the breed main foe. In the north west of England, the area around Manchester was named Cottonopolis due the cotton industry which flourished there. This area at that time was the home of many Manchester Terrier breeders; the locals started using the name Manchester Terrier instead of Black and Tan Terrier. This led to the United Kingdom Kennel Club changing the breeds name in 1924 to the Manchester Terrier.

The Manchester’s existence has not been an easy journey and has been near the edge of extinction. Due to the banning of ear cropping that affected numbers, the banning of the so called sport of Rat Pits and two World Wars. The United Kingdom allowed two imported Manchester Terriers from America as well as crossings with English Toy Terriers to increase the gene pool. The two American dogs were named Gwinny Willow Thunder Storm and Sir Oscar of Chatham Farms, these dogs can be found in bloodlines across Europe today.

This website uses cookies to improve your experience while you navigate through the website. Out of these, the cookies that are categorized as necessary are stored on your browser as they are essential for the working of basic functionalities of the website. We also use third-party cookies that help us analyze and understand how you use this website. These cookies will be stored in your browser only with your consent. You also have the option to opt-out of these cookies. But opting out of some of these cookies may affect your browsing experience.
Necessary Always Enabled

Any cookies that may not be particularly necessary for the website to function and is used specifically to collect user personal data via analytics, ads, other embedded contents are termed as non-necessary cookies. It is mandatory to procure user consent prior to running these cookies on your website.